Many times there’s just not enough space to publish everything you’d like to say about a recording, especially a re-issue. Here are some additional thoughts I wrote about Film Noir that weren’t able to be used when it was re-released.

These are among my favorite films throughout the last 70 years. Many of you may quibble with my choices, particularly for including Blue Gardenia, which is far from a masterpiece, and not even one of Fritz Lang’s better Hollywood films.

Spiral Staircase, however, is another matter, even if it never makes the Top 20 lists. I do believe it is a masterpiece. When I first saw it at the Capitol Theater in Springfield, MA in 1946, I was exactly 11 years old. I must have crept out of our house, detouring through a neighboring cemetery, to avoid being seen by my family from their bedroom window, which faced west toward downtown and the theaters. Afterwards I wrote to the whole cast with diffuse congratulations, and only one cast member answered me: this was Carlton with his footprint. Ethel Barrymore’s edgy performance as Mrs. Warren captivated many of us. Her dark, probing eyes reminded me of my grandmother, Jessie Arnold Powers. When describing the death of a helpless victim from years before, she mesmerized us with her poetic memories.

Cinematographer Nicholas Musuraca’s camera work is fantastic, particularity for that time period. He films Helen (Dorothy McGuire) ascending the stairway as his camera pokes through a villain with satanic plans. Robert Siodmak, the director, is a genius. Only one other of his films, The Killers, has such ingenuity.

Over the years, I saw Spiral almost 30 times before the film was issued on VHS and later DVD. The whole film interplays Hitlerian fascism, where there’s no room in the world for imperfection, with a marvelous psychological whodunit.

A few years later I saw a critic’s favorite: All About Eve. I saw this again in 2014, and was astonished by the brilliant performance of Anne Baxter. The film introduced me to Thelma Ritter, who in the mid-50s left her imprint on many films, especially Pickup on South Street.

When I visited Spain early in 2015, Carlos Saura’s films were still overlooked. His real masterpiece is Cría cuervos…, but I’ve enjoyed The Garden of Delight which I saw in the late 70s at the New York Film Festival. It was so exciting to visit Huesca, the place of his birth, with violinist-educator Eden MacAdam-Somer and trombonist Aaron Hartley, my invaluable manager.

The Garden of Delight concerns a hero who has suffered a stroke which has disturbed his mind. His amnesia infuriates his family. They stage a series of charades depicting his earlier life, while attempting to discover his secret Swiss bank account password.

Key Largo may be one of the least important Bacall and Bogart collaborations. Edward G. Robinson, now recovered from his insanity that was displayed in Red House, returns to his ruthless criminal behavior as he menaces Lionel Barrymore and Claire Trevor. Betty Carter’s piece, which so many musicians including Sarah Vaughan have recorded, is actually not in the film, but Greg Silberman, who co-produced the album and I felt we should have a fairly lightweight number in the album.

Pinky, Elia Kazan, may be considered dated by some of you, but there are so many remarkable scenes, particularly with Ethel Waters and the other Ethel, Barrymore, again occupying a large bed. Ms. Waters’ early Columbia recording, without words, is one of her most remarkable achievements and has inspired a generation of singers, including New England Conservatory’s Dominique Eade, and for which singer Lukas Papenfusscline hails her as “vocal color and depth of feeling.”

Touch of Evil still remains my favorite Orson Welles work. There is a remarkable cameo by Marlene Dietrich, who glistens as she reminds Welles’ seedy character about their past life.

Le Boucher, along with Vertigo remains one of my favorite films of all time. When we were developing the Film Noir album, I was just beginning to obtain, at home, the equipment for video rental; but I wasn’t able to really review the film in depth. I’m amazed by the Jean Rapier photography, the performances of Stéphane Audran, and particularly the music of Pierre Jansen. His scores for the Chabrol never bore. The greatest ones cover the Helene cycles– This Man Must Die, a revenge thriller, and the gutsy melodrama, Rupture. The latter score is influenced by Messiaen. 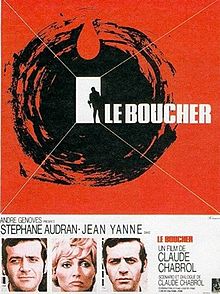 Some of my most treasured moments took place in the year of 2007 when Philippe Levreaud and Jean-Jacques Rouveroux, along with David “Knife” Fabris, the wonderful funk guitarist and my manager at the time, arranged a trip to Trémolat, visiting the scenes where the wedding took place and the mountain top where red rain reveals a tragedy.

When I visited Trémolat, I met the town butcher’s assistant, who has a minor role. Chabrol offers so many nostalgic, sad scenes in this enchanted village, shrouded by the mist of the night. The brilliant Pierre Jansen’s score allows a bewildered cat to cry. There is silence where a character doesn’t appear, or when our heroine is sitting, thinking. This is not a war film, but Chabrol reminds us how the Algerian-French conflict numbed the sanity of French citizens as well as those from Africa. I encountered many people of Trémolat on that trip who fervently wished Claude Chabrol would be there for his 80th birthday.

Sidney Lumet has made many fine films but I find The Pawnbroker to be his greatest. Rod Steiger gives a riveting performance. Our attention is grabbed by the fabulous Quincy Jones score. This film shows horrific scenes depicting the neighborhood where the pawnbroker works, underscored by equally disturbing flashbacks of the German Gestapo. One scene is particularly vital. We see a young man in Harlem ruthlessly attacking a youth, and suddenly we hear the barking of a dog that snarls into the face of our hero’s former wife being tortured by an officer.

Our musical collaboration a few years ago, produced by Aaron Hartley in Jordan Hall, interwove film clips from The Pawnbroker with improvised performances by New England Conservatory students and faculty, was considered a highlight of our annual presentations.

Doctor Mabuse is one of the most fascinating men I’ve met during my 80 years on Earth. I wish when I recorded this version that I’d had a print of the film, so that I could have given my performance much more detail, having had time to absorb the memorable score by Konrad Elfers. Unfortunately, Elfers’ score was dropped from the two recent DVD sets, due to enthusiasts finding more footage than there is music, but you can find it on YouTube.

In the early 2000s, I devoted a whole semester to the Mabuse oeuvre, tracing more than 40 years of films dominated by his brand of psychotherapy. Although the second installment of Mabuse, The Testament of Dr. Mabuse (1933), which was Fritz Lang’s second sound film, has some fine footage, it suffers by comparison to the earlier, two-part film: Dr. Mabuse, The Gambler (1922).

Mabuse is a real devil. His character dominates gambling scenes, he writes deadly prescriptions to the ailing Count Told, and he manipulates the stock market. He’s able to give his patients terrible flashbacks of their misdeeds, and we see the destructive effect his hypnotic spell has on his victims. Mabuse’s escape through the sewers of the imagined Berlin predates footage of Orson Welles’ escape in The Third Man.

Blue Gardenia may be one of the least significant Fritz Lang films, and is not even considered a paramount one in his late Hollywood period. There are nice moments midway as we see the intermingling of the sexist journalist, Richard Conte, with Raymond (“Perry Mason”) Burr who flirts with the svelte Ann Southern. The film’s midsection is the only really fresh part and becomes beautifully nostalgic with an unassuming performance by Anne Baxter, and the special delight of the Nat King Cole cameo.